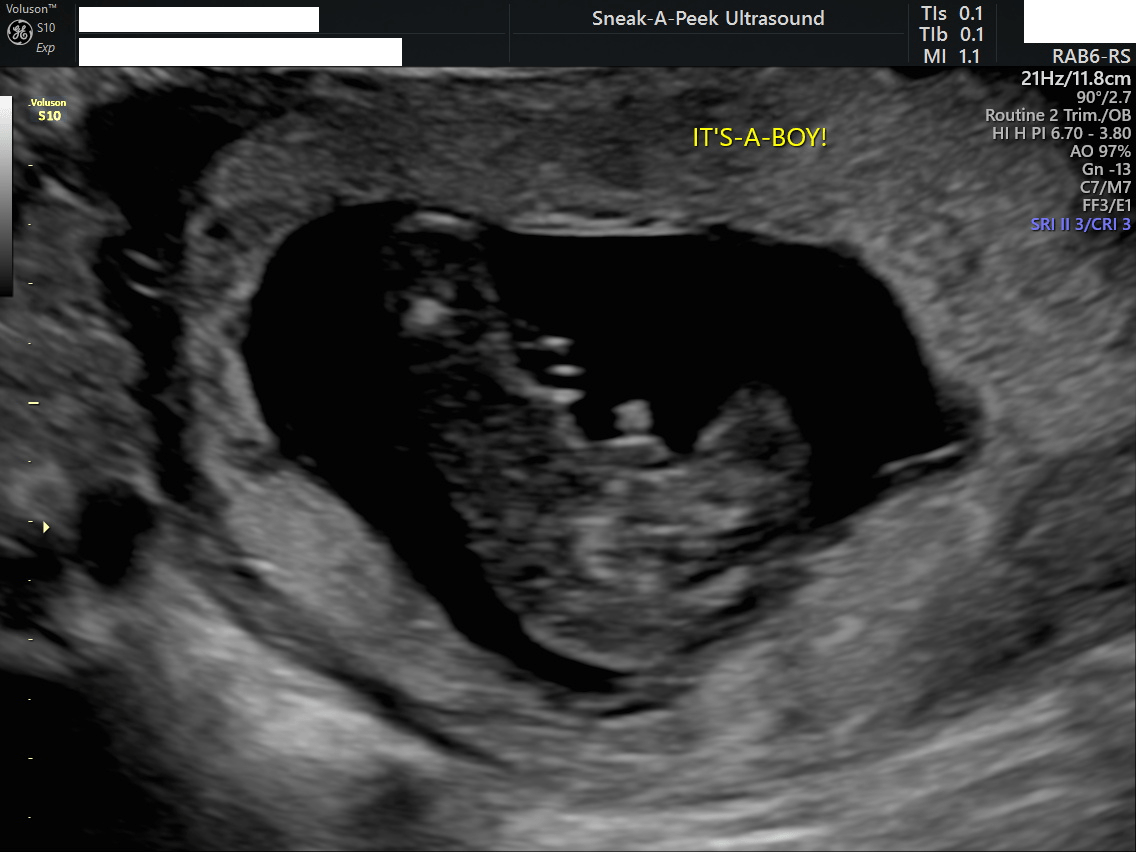 "I was skeptical about private gender scans"

This was my 3rd child.

With our first two, we waited for our 20-week NHS scan to find out their gender.

So this time, John said, "let's just do the same again."

And that was that.

Over the next few days, I recalled the 20-week scan we had with our 2nd child.

On one hand, it was a big relief to know our baby was still healthy. I was also grateful to find out the sex at the same time. Yet, on the other hand, I remembered it being a little underwhelming.

"Would you like to know the gender?" the sonographer asked me.

And that was the gender reveal.

Nothing wrong with it...

We knew it wouldn't be a magical experience, and we knew we could make it more special with a private scan if we wanted to.

At the time, though, it just seemed like a waste of money.

After all, we could find out the gender for free at our NHS scan.

This time, though, something didn't sit right.

"I mean, this is going to be our last baby!" I kept thinking.

"I want to experience everything with this little one."

It was now or never.

So I decided that I would speak to John when I got home from work.

To be honest, I was expecting resistance. We'd never had a private scan before. And when we'd discussed it in the past, he said it would be a waste of money, and was quick to point out that we had a lot of other things to buy for the baby.

But to my surprise, when I explained why I was considering a private gender scan, John began to warm up to the idea.

So that's what we did.

We booked a private gender scan with Maria at Sneak-A-Peek.

It was the best decision I've made in all 3 pregnancies.

We found out the gender at 16 weeks. Having an extra month or so made organising everything much easier than our previous pregnancies.

But what surprised me the most was how Maria explained our baby's anatomy in such depth. It was so interesting and a massive relief to see that he looked how he should look.

I left feeling like I knew my baby much better than before.

We do have one regret, though.

Why didn't we do this with our first two?

We weren't sure whether to find out gender

But I'm happy that we did. Knowing that my baby is all healthy is the main thing because it put my mind at ease. Maria was excellent and I felt at ease talking to her. She was lovely and really made the experience.

I am on my third and last baby and if that wasn't the case I would be booking this scan for any new pregnancies I might have had. It was the best decision in all 3 pregnancies that I have made.

I just liked the in-depth understanding of the anatomy of the baby. It's so interesting and a real relief to understand what you are seeing on the screen.

We got to see that the baby was forming and growing well and how he should be. We found out the gender (a new thing for us) which will make my organising everything a lot easier.

Maria was exactly how and who you'd want her to be. I felt so at ease and so comfortable around her. The environment was calm and relaxing but not too quiet that you felt you couldn't speak. The perfect balance.

When we decided we wanted to find out baby's gender, we knew we wanted to do it in that environment rather than in a hospital scan.

My partner and I found it to be a much better experience having the scan with Maria versus going to the hospital. It is so much more relaxed, calm and personalised.

We love how Maria talks us through every step, what she is doing, what she is looking for and why as well as giving us time to process. It makes the process much less anxiety-provoking and much more enjoyable.

I would recommend Sneak-A-Peek Ultrasound a million times over. This was our second scan with Maria and when we will hopefully be back with baby number 2!

But Maria made the scan incredibly special for us. It really felt like she cared about our experience and she took the time to explain everything in detail.  Finding out the gender was amazing too, and we're really glad we found out there and then as she was able to explain exactly what we were looking at. NHS scans are great but you don't get the personal experience that a private scan provides, and you have so much more time to ask questions, hear the heartbeat, get lots of photos and videos, etc. A huge thank you to Maria for her excellent communication before, during and after the scan. We absolutely loved every second and are so pleased we decided to have the scan. It was worth every single penny.

What you get for your money

Premium bonus: Announce your baby's gender with a bang!

Opt for the premium version of the scan and get a cannon - filled with blue or pink confetti - to reveal your baby's gender.

Buying a cannon yourself would require purchasing both colours and asking me to identify the right one.

This way, you save money, hassle and waste, because you only pay for the cannon you need and I'll take care of everything.

"We loved the fact we could have the gender of our baby written in an envelope and also get a pre-loaded confetti cannon so nobody had to know the gender before us." - Harriet Dare 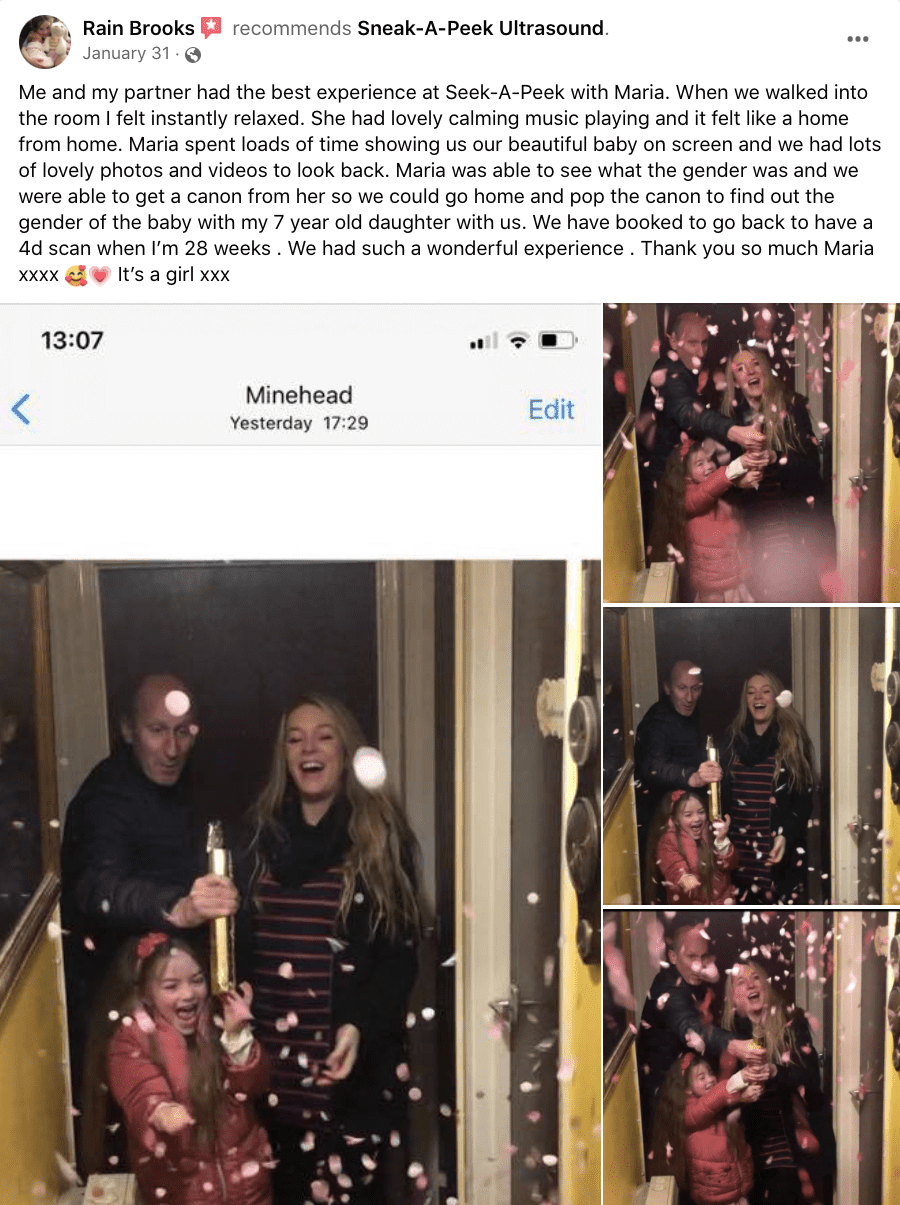 Why some gender scans go wrong

An ultrasound scan is the most accurate way to reveal your baby's sex...

And most mistakes occur because the scan (and the reveal) was rushed.

That's a problem because your baby isn't always in a good enough to see their "bits" clearly.

So, it can take some patient investigating to be sure.

Which can only happen if there's time to persevere.

That's why, unlike any other gender scan, you get a 45-minute appointment at Sneak-A-Peek.

Plenty of time to check, double-check and triple-check your baby’s gender.

If they’re not in a good position, there’s time to try a few tricks of the trade.

First, I’ll ask you to walk and jiggle around the room for a while. If that doesn’t work, I’ll invite you to go for a walk and come back in 5 or 10 minutes. Then, if your baby is still not in a good position, I’ll ask you to consume something sugar (there are sweets on tap!)

"Maria was super thorough and made sure she was 100% certain before revealing the gender to us. We have the whole scan on USB to share with friends and family as well as a fridge magnet to put a scan photo in. It was the best experience ever and we have been to other private scans before." - Kira Warner

How to book a gender scan

If you'd like a well-being + gender scan, the next step is to request an appointment. I recommend doing so right away to maximise the chance of securing an appointment in your preferred time-frame. I only have the capacity to do 32 scans per week and most of those are booked in advance.